BROWNSVILLE, Texas — Not far from the Rio Grande, this state’s border with Mexico, a tall barrier of thick steel slats rises over an open field. As you drive northwest along Southmost Boulevard, the terrain remains mostly vacant, dotted sparingly with houses.

Suddenly the air starts to smell of smoke and cumin. The buildings ahead are awash in bright yellows and reds, with signs advertising barbacoa and flautas. The boulevard becomes a string of restaurants, one on practically every block for the next few miles. 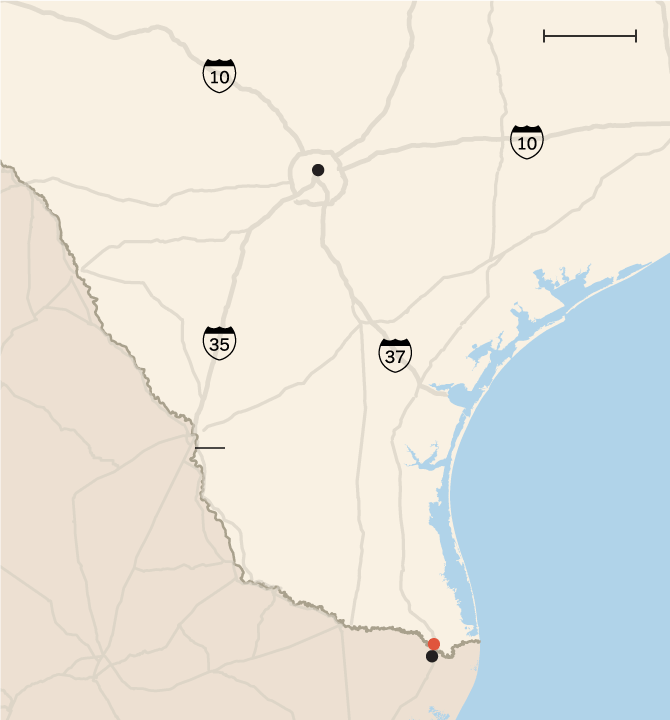 Border towns have long labored under bad reputations, which have only worsened in recent years as the Trump administration denounces these communities as violent, dangerous and depressed. But those labels overlook Brownsville’s successes, including one of the city’s biggest points of pride: its tacos.

Along Southmost — the name of both the street and the neighborhood — you’ll find some of the best in America, both in variety and quality. This stretch of road has played host to many taco purveyors since the area was developed after World War II. As the competition has ramped up and the taco-eating public has grown more discerning, the collection has been winnowed down to a superlative 20 or so restaurants and stands.

“Some of the greatest and most important taco places in the country are in Brownsville,” said José R. Ralat, taco editor (yes, taco editor) at Texas Monthly and the author of the forthcoming book “American Tacos: A History and Guide.”

Mr. Ralat said that while there are many superb places to eat tacos along the border, Brownsville is remarkable for both the number of its taco vendors and their excellence. “It is just one hot spot, but it really is a bright hot spot.”

On Thursday, the James Beard Foundation endorsed that view by naming a Brownsville restaurant, Vera’s Backyard Bar-B-Que, one of six recipients of its 2020 America’s Classics Award, “given to locally owned restaurants that have timeless appeal and are beloved regionally for quality food that reflects the character of its community.”

The foundation singled out Vera’s specialty, barbacoa: “Brownsville is a four-hour drive from San Antonio, the closest major Texas city, but the chance to savor this disappearing border-town delicacy merits a pilgrimage.”

Vera’s barbacoa is just the start. At Sylvia’s, a diner stuffed with Dallas Cowboys paraphernalia, the large flour tortilla encasing the machacado con huevo a la Mexicana, which pairs salty dried beef with fluffy eggs, is buttery and flaky — as if a French pastry met a paratha. Easy To Go Tacos, a tiny, mirror-lined box of a restaurant, is known for its exceptional flautas, tiny tacos rolled up with beef or chicken and fried that can be quickly polished off by the dozen.

Business is brisk at most of these establishments, each of which seems to have its own loyal following. Though there are some customers from elsewhere in Texas or beyond, most are Brownsville residents, drawn simply by word of mouth. (The website of the Brownsville Convention & Visitors Bureau has no listings under “Places to Eat.”)

There is considerable hardship in Brownsville — 31 percent of its 183,000 residents live in poverty, according to 2018 census data — but also signs of growth. Annual retail sales total $1.9 billion, the city reported in 2019, while the unemployment rate had fallen to 5.6 percent in December from about double that in 2013, according to the Federal Reserve Bank of St. Louis.

SpaceX, a private aerospace manufacturer founded by Elon Musk, broke ground on the world’s first commercial orbital rocket launch site here in 2014, bringing an influx of capital and jobs. A more divisive employer is Casa Padre, a former Walmart now being used to house about 120 boys, ages 10 to 17, who crossed the border as unaccompanied minors, many fleeing poverty and violence.

The Southmost area, affectionately known as La Southmost, has become a lively center with schools, grocers and banks, frequented mainly by the city’s robust population of Mexican immigrants, many of whom arrived as part of the Bracero Program, a collaboration between the United States and Mexico that brought millions of guest workers to America from 1942 to 1964. The taco restaurants that opened here in the 1950s and afterward served as models for what would become the modern American taqueria.

What keeps all these places busy is that each has a distinctive style, said Mr. Ralat, who wrote a guide to Southmost tacos last September for Texas Highways magazine.

Vera’s, which opened in 1955, is the only restaurant in Texas with a permit to cook meat underground, according to a city health department spokesman. A co-owner, Armando Vera, 59, has been making barbacoa there since he was 12, when his parents ran the place. He smokes cow heads in a pit behind the restaurant for several hours, until the meat is charred, soft and shreddable, then serves it with corn tortillas, onions, cilantro and several kinds of salsa.

Barbacoa is also a specialty at Marcelo’s Tacos. Evangelina Rocha, 58, who grew up in Matamoros, the Mexican city just across the border, runs Marcelo’s (not to be confused with Tacos de Marcelo, another business, she pointedly noted) with her husband, Abel Mondragon. They opened the place in 1982, because it was the only way they could find work.

It took 10 years to grow popular, she said, but today Marcelo’s draws some diners all the way from Germany and China. Last year, the couple opened a second location nearby, run by their sons, Isai and Adan Mondragon.

The key to a good taco is in the details, Ms. Rocha said. Has the meat been well-cleaned? Are the tortillas homemade? Are high-quality dried beans used? Is attention being paid to the salsa? At Marcelo’s, another standout is the chicharrones verdes, chewy pork skins bathed in tomatillos, green chiles and cilantro, then served inside plush corn tortillas.

But for all the neighborhood’s unanimous enthusiasm about tacos, the people who work at and frequent the taquerias are split in their response to the immigration policies playing out in Brownsville. No one interviewed agreed with those policies, but some said they had no big effect. Others were reluctant to speak out, while some voiced fears about their futures.

Southmost residents live daily with the fallout of immigration politics, from the Casa Padre shelter for minors, near a middle school, to the 2019 Migration Protection Protocols, which require asylum seekers to stay in Mexico while their applications are processed. The area around Matamoros has become the one of the largest refugee camps on the border, with people living in squalid and sometimes violent conditions.

Ms. Rocha said she has had a harder time finding new employees at Marcelo’s since the protocols were put in place. “The people who want to work don’t have papers,” she said, while many of those who do have them rely on unemployment checks and don’t feel the need to get a job.

Friends have told her stories about Immigration and Customs Enforcement agents raiding restaurants and taking away employees and diners who don’t have proper documentation — though she hasn’t experienced this herself.

Danielle Bennett, an ICE spokeswoman, said she couldn’t confirm or deny that without an account of a specific action. She rejected the term “raid,” she said, “because of the implication of the randomness.”

“There is a perception that we are walking into restaurants and collecting IDs,” she said. “We work just like other law enforcement does — we have targets we are looking to arrest, we do intelligence research looking for specific individuals who are known fugitives to us, who have orders of removal, who have criminal convictions in the United States.” But she did acknowledge that others could be detained in the process.

A spokesman for the city, Felipe Romero, said the stories about raids were untrue. When ICE receives any complaints, it gives businesses time to respond. “The ‘as seen on TV’ raids do not take place in our region,” he said.

But Ana, 35, a server at a Southmost taqueria who did not give her surname because she is undocumented, said she was certain that restaurants were being raided. “I knew a cashier, she had an accent, and they took her away along with the whole kitchen,” she said. “We are very scared.”

Mr. Vera, of Vera’s Backyard Bar-B-Que, has heard the stories, too. “It’s just chisme,” or gossip, he said, as he unwrapped the foil around a steaming cow’s head, plucking out an eyeball to serve to a regular. “People exaggerate. We are all still here.”

Norma Almanza, who was born and raised in Brownsville and owns Sylvia’s with her husband, Javier Almanza (they bought the place from a previous owner in 2001), said she still freely crosses the border, to see friends or her ear doctor.

“People say you are going to get killed and all this,” she said. “That doesn’t mean it is going to happen.”

Both Ms. Almanza and Ms. Rocha said they have served ICE agents and members of Border Patrol. “They are regulars, and there are a bunch of them,” Ms. Almanza said one morning, seated in her restaurant.

Ms. Almanza, 54, has seen the tents for refugees in Matamoros. “I don’t think it is a nice thing to do,” she said. “But what can I possibly do or say to make Trump or somebody else do something?” And the troubles at the border predate the current administration, she added; Southmost has been living with the tension for decades.

“Have you tried our corn tortillas?” she immediately added, directing a waitress to bring a few over. “They’re the best.”

There is some activism. Volunteer groups like Team Brownsville cross the border regularly to provide food and supplies to the migrant camps.

But some servers and customers at the taquerias didn’t even realize that Casa Padre was in Brownsville. Dominga Salazar, 70, a retired teacher who is a regular at Easy To Go Tacos, lives next to those steel slats near the border. She said her property value had increased.

Mr. Ralat, the Texas Monthly editor, lives more than 500 miles away, in Dallas. Visiting Brownsville, he said, is a mixed experience: On the one hand are the exceptional tacos, and on the other, the poverty and border politics.

As a Latino, he finds the steel barrier upsetting — “like cutting off a limb,” as if the tacos can be separated from their place of origin.

“Without Mexican cuisine and culture,” he said, “there is no Texas.”

Al Qaeda or ISIS Could Rebuild in Afghanistan, Officials Warn

Milley Defends His Calls to China During Trump’s Term

How You Can Find Rental Assistance in California

A.C.L.U. Apologizes for Tweet That Altered Quote by Justice Ginsburg

Charles W. Mills, Philosopher of Race and Liberalism, Dies at 70

John Hinckley Jr. to Be Unconditionally Released in June

Frances T. Farenthold, Liberal Force in Texas and Beyond, Dies at 94

Biden is expected to receive a Pfizer-BioNTech booster.

The U.S. Debt Ceiling: Everything You Need to Know

Murders Spiked in 2020 in Cities Across the United States

General Milley Back in the Center of a Political Battle

Three Men Are Charged With Approaching Bears in Alaska

Social Anxiety Has Worsened Among Young People in the Pandemic

When Californians Will Get Covid-19 Boosters

The Cause of the Derailed Amtrak Train Remains Unclear

At Black-owned funeral homes, many staffers are feeling burned out.

For Schumer and Pelosi, the Challenge of a Career With No Margin for Error