VISEGRAD, Bosnia and Herzegovina — As night falls, owls hoot and frogs croak in the forest around Vilina Vlas, a spa getaway in eastern Bosnia. A gentle wind rustles the pine trees that swaddle the health resort, described by one guidebook as “a perfect spot for a romantic evening.”

Eager for a good rest after a long bus journey, Kym Vercoe, an Australian actress on holiday in the Balkans, checked into the spa hoping to enjoy its soothing calm.

But something was off. She could not sleep. “I was awake all night, ” Ms. Vercoe recalled in a telephone interview from Australia.

After she returned home, she read up on the place and learned about its history: The spa hotel had once been a rape and murder camp. She wondered if she had sensed its history in some way, and said she “felt duped and angry.”

“I am not a religious person but I felt awful just being there,” Ms. Vercoe said.

United Nations investigators reported in 2011 that at the spa, “the prisoners were raped repeatedly.” The investigators detailed how, during the Balkan wars of the early 1990s, the spa had been commandeered by a gang of Serb nationalist thugs who called themselves the White Eagles and The Avengers.

Many of their captives, mostly Bosnian Muslim women but also some men, the U.N. concluded, were “never seen again.” Some women jumped to their deaths from upper floors, while others were killed, “suffocated in a system of gas pipes at the hotel.”

Twenty-five years after a peace agreement reached in Dayton, Ohio ended the Bosnia war, how to deal with trauma left by the past still haunts the country.

Ms. Vercoe ended up writing a play about her experience, which was later turned into a film, “For Those Who Can Tell No Tales,” directed by Jasmila Zbanic, a celebrated Bosnian director, and starring Ms. Vercoe, who plays herself.

For Bosnians, however, dealing with past horror is far more difficult and painful.

Like nearly all issues in Bosnia today, views on what to do about the Vilina Vlas spa diverge sharply along ethnic lines. 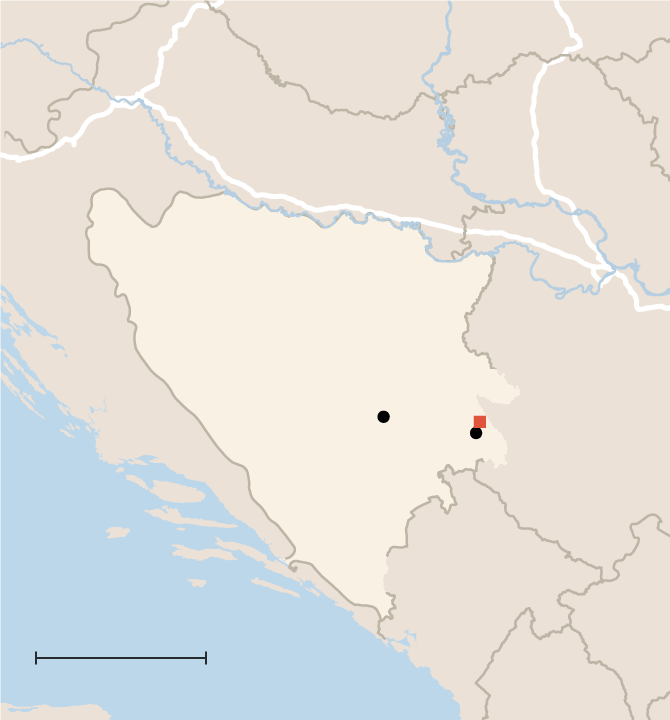 Some Muslim victims want the spa razed while others think it should be allowed to stand so long as past crimes are acknowledged. Most Serbs want the spa freed from the stains of the war so that it can help the local economy, which relies heavily on tourism, and even expand.

Tim Clancy, an American who has lived in Bosnia since the war and wrote the only comprehensive, English-language guidebook to the country, said he had long wrestled with the question of “how long a community should be held hostage to the past.”

Bakira Hasecic, a Bosnian Muslim who fled her village near the spa in 1992 after a campaign of “ethnic cleansing” by Serb fanatics, described Vilina Vlas, which reopened to paying guests after the war, as “the center of evil.”

Yet, she doesn’t think it should be shut down. “If we closed every place in Bosnia where war crimes occurred we would have to shut down the whole country,” she said, explaining that all she asks for is a plaque at the spa’s entrance to acknowledge past crimes.

Raped three times herself, though not at Vilina Vlas but, she said, but at a police station in the nearby town of Visegrad, a school and the Institute for the Protection of Women and Children, Ms. Hasecic has struggled for more than two decades to force a reckoning with Bosnia’s past.

She founded the Association of Women War Victims, interviewed survivors and testified before the International Criminal Tribunal for the former Yugoslavia, a court in The Hague, which has convicted some of those responsible for the horrors at Vilina Vlas, including a former leader of the White Eagles, Milan Lukic.

“There is not a single bed in this place on which a woman was not raped or killed,” Ms. Hasecic said during a recent visit, referring to evidence she collected showing that around 200 women were sexually assaulted at the spa, of whom only 15 escaped alive. “Anyone who knows what happened, if they are at least a bit normal, would not stay there.”

What happened, though not the details, has long been known, starting with a Washington Post report in 1992 of a 17-year-old rape victim and her 15-year-old sister, and a 1996 investigation into the wartime crimes of Mr. Lukic by The New York Times. But many guests, like Ms. Vercoe, still have no idea.

Those who work at the spa today, many of them too young to have played any role in the crimes of the 1990s, seem to want to forget.

On a visit in late fall, the spa was busy, despite the coronavirus pandemic. Fitted with the same dark wooden closets and beds that were there during the war, some still bearing carved wartime inscriptions, the spa’s 72 rooms line long gloomy corridors covered in stained red carpets.

The whole place radiates muffled menace, mixed with the smell of cooking oil and cigarette smoke.

At any mention of the war years, staff members suddenly became mute or hostile. An otherwise friendly receptionist, asked about reports on the internet of the terrible crimes in 1992, bristled angrily, protesting that “the internet is full of lies” and “you can see everything is all fine here.”

Built in the 1980s before Yugoslavia, a multiethnic socialist state of which Bosnia was then part, disintegrated into war, Vilina Vlas is today owned by the Republika Srpska, a self-governing Serb region of Bosnia.

The region’s dominant politician, Milorad Dodik, has repeatedly denied Serb crimes in the 1990s, and even dedicated a student dormitory to Radovan Karadzic, the Serb wartime leader now serving a 40-year sentence after being convicted in 2016 of genocide, war crimes and crimes against humanity.

Mr. Dodik, now the Serb member of Bosnia’s three-person presidency, visited Visegrad in October, ending his trip with a visit to the spa and a promise to invest $1.5 million in the facility to increase its appeal for tourists.

This summer the government of the Serb region started offering residents vouchers to redeem for free nights at Vilina Vlas and other spas in the area, which was largely “cleansed” of Muslim Bosnians during the war.

But Bosnian Muslims, also known as Bosniaks, have responded angrily to what they see as an effort to whitewash the spa’s gruesome past, an effort aided inadvertently by the American tech giant Google.

An online petition launched recently a lecturer at the University of Sarajevo in the Bosnian capital, demanded that Google “remove Vilina Vlas (as a tourist site)” from its search engine and map tool. Reviews listed by Google are nearly all favorable, with the former rape camp hailed as “absolutely fabulous,” “great for resting” and “very calming.”

“If somebody decided to turn Auschwitz-Birkenau concentration camps into a wellness retreat perfect for a ‘relaxing weekend getaway,’ would you let them promote this on Google?” the petition, already signed by more than 26,000 people, asked. “Would you allow it to appear on Google Maps as a tourist facility?”

A Google spokesman said the company makes “every effort to objectively display the real world as much as possible,” adding that “this location is both a current business and a place that has historical significance.” An online search quickly produces information about its awful history.

Ms. Hasecic of the war victims’ association said Serb women in Visegrad had spoken with her privately about wartime atrocities by Serb extremists but “none can speak publicly” because of pressure to stay silent.

Bilal Memisevic, the only Muslim member of Visegrad’s town council, said he had been asking for years that the authorities put up a plaque at the hotel to commemorate the victims.

“We understand that the spa was and will be a magnet for tourists and are not asking for it to be shut down,” he said. “All we want is a single sentence on the wall saying: ‘At this site war crimes were committed between this date and that date.’”

But that, he added, has proved impossible because “the official position of Bosnian Serb leaders is to deny everything.”

Olivera Todorovic, the director of Visegrad’s tourism department and a stout defender of the view that accounts of wartime crimes at Vilina Vlas are “exaggerated and unfair,” said she wanted the whole issue to just go away so that visitors can enjoy the town’s other sites like a magnificent 16th-century bridge over the River Drina.

“We are trying to forget about the war years and develop tourism,” she said. “Why do we have to keep talking about the past?”

Israel to Halt Most Air Travel

French Roosters Now Crow With the Law Behind Them

For Nicaragua’s Lobstermen, Deadly Dives Are All Too Common

A Decade On, Silence Fills Egypt’s Field of Broken Dreams

If Poor Countries Go Unvaccinated, a Study Says, Rich Ones Will Pay

Hong Kong locks down a neighborhood for the first time since the pandemic began.

Fresh Starts at the Top in Both Washington and Ottawa

How Beijing Turned China’s Covid-19 Tragedy to Its Advantage

Voices From China’s Covid Crisis, One Year After Wuhan Lockdown

Johnson Hints Variant May Be More Deadly, Though It’s Too Soon to Tell

Smugglers Get Long Prison Terms in U.K. for Their Roles in Killing 39 Migrants

A glimmer of hope in the U.K.: Nearly 5 million have received vaccine shots.

An Australia With No Google? The Bitter Fight Behind a Drastic Threat

Fauci Tells W.H.O. That U.S. Stands Ready to Work With It

At Least 3 Killed in Madrid Explosion

Will Biden Be an Activist President on the World Stage?

Italy says it will sue Pfizer over delays in vaccine delivery.