TÉRRABA, Costa Rica — For decades, members of the Brörán tribe in southern Costa Rica longed to take back what they considered ancestral land from the farmers who also claimed it. One weekend last month, they acted, entering several farms, hanging up signs and vowing to stay put.

It was not long, they said, before group of agitated farmers came out on horseback, motorbikes and in pickups. Armed with machetes, sticks and firearms, the farmers huddled at the top of the mountain for hours, hurling threats, as Indigenous leaders implored the police to come help. 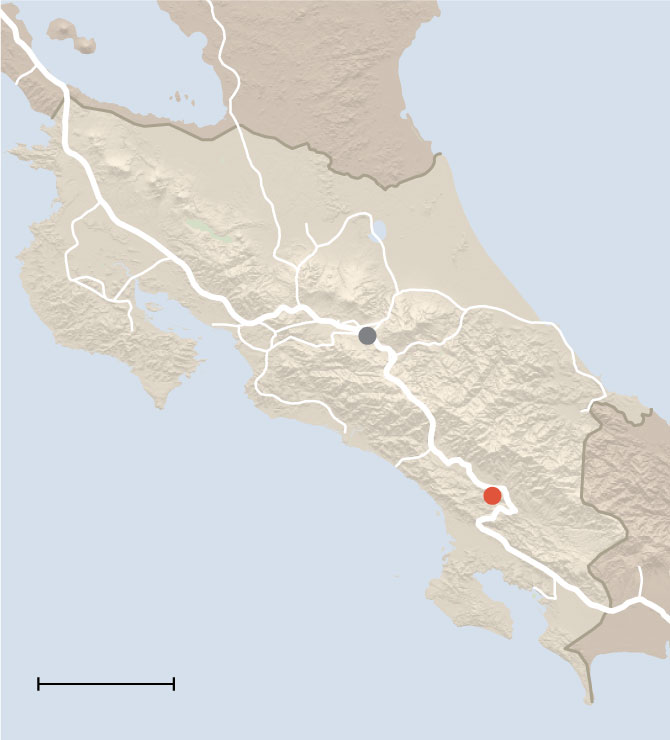 Elides Rivera, a local Indigenous land rights leader, still has the voice recording of the call for help she made to a local police commander: “I beg you with all, all my heart.”

But soon after, a brawl broke out, and it ended in the death of her nephew, Jerhy Rivera, 45, who was an Indigenous activist in the community.

Mr. Rivera’s death came just a few weeks after another Indigenous man in a nearby town was shot in a dispute over land, and a year after a land rights leader in that town was gunned down in his home.

Over the past five years, conflicts over land and natural resources in the region have led to about 200 confrontations and the deaths of 60 Indigenous people, according to the Business & Human Rights Resource Center, a London organization.

Four Indigenous people were killed in an attack in Nicaragua in January, and at least a dozen more died in Colombia in just the first two weeks of this year, according to the United Nations.

The deaths in Latin America are the result of increasingly violent clashes between people who have lived on the land for thousands of years and settlers who have arrived much more recently.

From Mexico to Brazil, Indigenous tribes moving against stop ranchers, loggers, miners and other business interests — sometimes aggressively — are hoping to reclaim their community land.

Sometimes, they are dying for it.

And when they do, the newcomers to Indigenous lands rarely seem to pay a legal price.

“I told you these criminals would keep coming,” Ms. Rivera said in a follow-up message to the police commander. “Thank you. Today, you let them kill Jerhy.”

Mr. Rivera, a father of four, sold chickens and worked to promote awareness about his tribe. In 2013, he was beaten in a dispute with loggers.

Mr. Rivera was a member of one of the nearly 800 Indigenous tribes in Latin America. Many of them were never colonized after the arrival of the Spanish and the Portuguese to the continent, and maintained their languages and traditions.

Although some groups enjoy protections similar to that afforded Native American reservations in the United States, enforcement can be lax.

That can be particularly true in areas that are remote, or are rich in natural resources.

In Nicaragua, home of the Miskitu, the government has spoken against illegal land grabs by settlers, but has done nothing to stop it, said Laura Hobson Herlihy, a lecturer at the University of Kansas.

Four Indigenous people were killed in the country in January.

With no legal avenue to turn to, Indigenous communities sometimes team up to clear land of newcomers, a process they call “sanamiento.” In Costa Rica, it’s called “recovery.”

“They had shirts that said, ‘sanamiento’ across the back,” Ms. Herlihy said. “I used to tell them, ‘Dude, that’s a target on your back. That is just so dangerous. It gets so many people killed.”

In many cases, settlers occupying Indigenous land did not know that their land purchases were against the law. Many invested their life savings into the land deals and are unwilling to go without a fight.

Víctor Hugo Zúñiga, a 38-year-old father of three, is one of the thousands of non-Indigenous farmers living on disputed land in Costa Rica. He says the government gave his father land in the town of Olán back in 1972, five years before Indigenous reservations were established.

“We didn’t take it away from any Indigenous person,” he said. “Now after 45 years of living here, how are we usurpers?”

Most of the farmers in the disputes have nowhere else to go, he said.

Costa Rica, like Nicaragua, began offering special protections to Indigenous people and their lands in the 1970s.

Marcos Guevara, a professor of anthropology at the University of Costa Rica who studied Indigenous issues for more than 30 years, says the eruption of violence has been simmering for decades because of poorly enforced government policy.

When the government gave Indigenous groups swaths of land in 1977, farmers were supposed to be compensated, but few were.

“These are problems that the state itself created,” Mr. Guevara said.

Minor Mora, 61, a local farmer and member of the Buenos Aires Farmers Commission, said there are around thousands of non-Indigenous people living on Indigenous land in Costa Rica. The government, should help compensate or relocate them, he said.

“They all just kick the ball forward,” Mr. Mora said.

The Brazilian government’s role in the disputes has been even more contentious. Land invasions are on the rise across Brazil, where President Jair Bolsonaro favors ending protections for Indigenous lands. He says they impede economic growth.

In Mexico, the vast majority of the 14 environmental defenders killed in 2018 were members of Indigenous groups.

Worldwide, Central and South American Indigenous groups are the most under attack, according to the Business & Human Rights Resource Center, which maintains a database of attacks and killings of human rights activists.

With 54 violent incidents against Indigenous groups fighting businesses last year, Central America led the world last year in the number of such confrontations, according to Adam Barnett, the group’s spokesman. Honduras, he said, had the most.

The issue exploded internationally in 2016, when a Lenca woman fighting a dam in Honduras, Berta Caceres, was murdered. Seven men were convicted in that case.

The killings have been all the more alarming in Costa Rica, which has escaped the rampant violence elsewhere in Central America.

Cindy Vargas, 35, a member of a group of Brörán women called Ruta de las Aves, said that Costa Rica was sold as a multiethnic and multicultural country, but that it did not extend much beyond folklore.

“They see Indigenous people as the ones who dress up, make traditional food and dance,” Ms. Vargas said. “Costa Rica is a country with a double standard. They only care about the folklore, but not about applying rights in Indigenous territories.”

One of the plots of land seized by the Indigenous the weekend Mr. Rivera died had belonged to her grandfather, she said.

After his death, one man turned himself in to the police and claimed he had shot the Indigenous leader in self-defense. After a brief detention, he was released.

In January, just after the New Year, Mark Rivas, a 33-year-old Miskitu youth leader, was found dead in his home in Puerto Cabezas, Nicaragua. Even before the police investigated the case, the local government-affiliated radio station had declared it a suicide, his father, Carlos Hendy Thomas, said.

“We speak for the land, for the forests, and to silence us, they kill us,” Mr. Hendy said. “That is the only way to shut us up.”

Your Thursday Briefing: Liz Cheney, Out

Ukraine’s top commander says fighting at the front is ‘intense but fully controlled.’

Iran officials to demand penalty payment should US pull out of Nuclear Deal again: report

Suicides in Japan surged due to COVID-19 pandemic

The Party of Trump

At Last, Online Travel Planning Is Becoming (a Little) Easier

Read Your Way Through Reykjavík

Putin furious over US ‘hegemony,’ says end of ‘unipolar world order’ is on the horizon

Canadian trucker sentenced to 4 years in prison for smuggling $2.5 million of meth

10 Years After Disappearing in Syria, Freedom Is Elusive for U.S. Journalist

US has engaged ‘directly’ with Syrian officials about freeing Austin Tice: State Department

What are the sanctions doing to Russia?

Europe reopens many internal borders to its own travelers, as coronavirus fears linger

Sweden remains open as other countries lock down over coronavirus