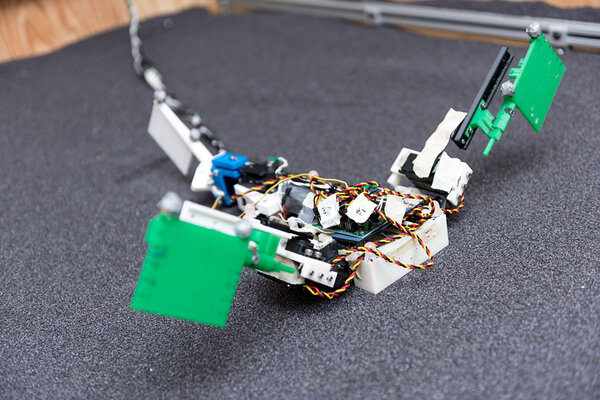 Some 385 to 360 million years ago, fish came out of the water and began to colonize the land. But how could an aquatic animal, accustomed to swimming, learn to walk on land?

To help answer that question, some scientists have turned to a living fish that can do just that: the mudskipper. And it turns out, those strange fish use their tails to navigate difficult terrain, according to new research published Thursday in the journal Science.

The mudskipper “captures some of the potential early aspects of the terrestrial locomotors,” says Daniel Goldman, a biomechanical physicist at Georgia Institute of Technology and an author on the new paper, in a phone interview with The Christian Science Monitor.

So perhaps the first vertebrates to move onto land used their tails, too.

Mudskippers are fish with fins, but they spend much of their time ambling around on land. Lacking legs, they must maneuver across the landscape differently from other vertebrates.

But mudskippers seem to have it all figured out. They use a pair of front flippers as if they were short little crutches, planting them against the ground as they pull their bodies forward, like Army crawling.

“It seems relatively straightforward,” Goldman says, particularly for scuttling over flat, hard surfaces like pavement. But these animals clamber over all kinds of terrain, and the vertebrates that made the transition from sea to land would have too.

Goldman and his colleagues wanted to know how the mudskippers maneuver up slopes of loose material, like sand or mud. So the team observed the fish in action to see if they still used the same crutching motion to navigate slippery slopes.

It turns out that they have help: their tails help propel their bodies up hills. The fish bends its tail to the side, plants it, and then snaps it back to thrust its body forward.

“The tail functions as a kind of buffer against failure,” Goldman says, helping an animal make it up a slippery slope.

“Whether the mudskipper actually represents a transitional stage for the transition from aquatic to terrestrial locomotion is still subject to some debate,” says Frank Fish, a biologist at West Chester University who was not part of the study, in a phone interview.

And “it would be a mistake to read this paper and assume that all early tetrapods moved like a mudskipper,” Miriam Ashley-Ross, a biologist studying functional morphology at Wake Forest University who was not part of this study, tells the Monitor in an email.

The big question is whether or not these findings are supported by the fossil record, says Stephanie Pierce, an evolutionary biomechanist and curator of vertebrate paleontology at the Harvard University Museum of Comparative Zoology who was not part of the study.

For example, Ichthyostega, thought to be a transitional fossil between fish and four-limbed land vertebrates, or tetrapods, had a stubby tail and two large hind limbs that likely played a role in helping balance the animal as it moved, Dr. Pierce explains in a phone interview. So if you were to look for the tail-propelling mechanism in the fossil record, “you have to consider the whole morphology of the animal and not just the tail.”

Other research teams have previously found that limbs began to evolve on fish before the move to land, Dr. Ashley-Ross says. So the first land-dwelling vertebrates were likely already well on their way to being tetrapods, she says, and their tails may not have functioned like modern mudskippers’ do.

“What this study does is show that limbs aren’t the whole story for moving on to land – that the tail, which had widely been considered more of a hindrance than anything else for the early tetrapods, might have made it easier for them to move on land,” she says.

Tracks in the sand

But even if the mudskipper’s locomotion doesn’t match that of long-extinct animals, studying their behavior could still help scientists figure out how the ancient animals moved, says Dr. Fish.

“We can ask the question, ‘If we had some ancient amphibian or fish that moved around, what would the pattern be that would be displayed and left in the mud itself?’ ” he explains.

Paleontologists can look for fossilized footprints, or finprints, to compare with the trails that mudskippers leave in the dirt today.

So in that way, this study “does provide some tools to help us interpret patterns in the fossil record and model stages not illustrated by the fossil record,” says Edward Daeschler, associate curator of vertebrate biology at the Academy of Natural Sciences of Drexel University who was not part of the study, in an email to the Monitor.

“We will never have complete information of early tetrapods and the vertebrate transition from aquatic to terrestrial locomotion from data in the fossil record, so we’ll need to ‘fill in the gaps’ with theoretical transitional stages informed by the best modeling that we can do. This paper provides some of that modeling,” Dr. Daeschler says.

To better understand how effective the tail-propulsion mechanism could be for a finned, tailed animal, Goldman and his colleagues built a simple robot.

A robot that used the locomotion principles of the mudskipper to move through a trackway filled with granular materials. The robot has two limbs and a powerful tail, with motion provided by electric motors. Courtesy of Rob Felt, Georgia Institute of Technology

It’s important to note that “they didn’t build an actual robotic mudskipper,” Fish says. Still, the robot can help scientists determine important parameters of this behavior, he says.

“The real strength of building a robot is that you can command it to produce any movement pattern you want,” Ashley-Ross writes in an email.

“With the real animal, you’re stuck with whatever it chooses to do, and it’s hard to make concrete conclusions about the impact of, in this case, the amount of tail movement versus the amount of lifting of the body (limb/fin adduction) – with the robot you can get exactly the amount of movement you want from each part and directly test how it affects performance.”