Is Hyperloop travel really the next big thing in tech, or just hot air talk? Jefferson Graham weighs in with members of the #TalkingTech roundtable podcast, for this new concept in super high-speed travel. Video by Robert Hanashiro

SAN FRANCISCO — Sunny southern California is considered the cradle of American hot-rod car culture. More than a half-century ago, returning war veterans turned their passion for fuel, machinery and adventure into an inspired automotive movement whose repercussions still echo.

So it’s perhaps fitting that the seeds of what could be a new transportation revolution are being sown in the same soil.

This weekend in the Los Angeles suburb of Hawthorne, Calif., 20 teams are competing for bragging rights to having designed the best hyperloop pod.

Hyperloop, for those not up on the sci-fi shuttle, is the name given to a pod-stuffed-in-a-sealed-tube mobility system that was sketched out in a white paper four years ago by SpaceX and Tesla CEO Elon Musk. Since then, a number of companies have sprouted up with an aim to commercialize this tech, including Hyperloop One and Hyperloop Transportation Technologies. 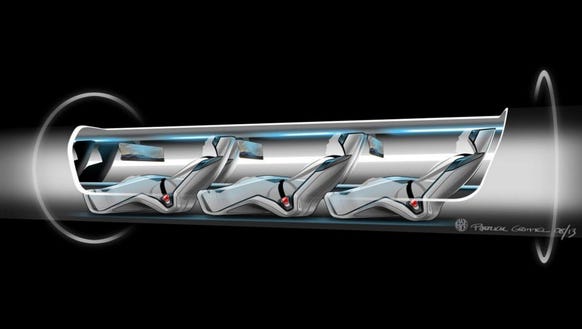 The gist is that a trip from Los Angeles to San Francisco, which currently takes about 6 hours by car, would be sliced to 30 minutes thanks to a magnetically levitated pod zipping through a sealed tube at up to 600 miles per hour. Think air hockey puck given the slightest nudge.

Musk has expressed no interest in starting a hyperloop company, but he has been eager to promote scientific research into the concept. To that end, he has sponsored a Hyperloop Pod Competition whose finals are now unfolding on the Los Angeles-area campus of SpaceX, where a one-mile tube track is ready to crown the best pod.

“What we get if we win isn’t really clear, SpaceX is being really obscure about that, but really for us it’s more about the challenge,” says Tom Lambot, a NASA employee who in his spare time is lead engineer for Team rLoop, an international team whose geeked-out members met on Reddit and communicated via Slack to help design their 5-foot-high by 12-foot-long pod.

The rLoop hyperloop pod, which will compete with pods made by 19 other teams at this weekend’s SpaceX-sponsored competition in Los Angeles. (Photo: rLoop)

“I believe hyperloop will be something, when I don’t know, and what it will look like exactly I don’t know, but there’s a lot of interest in this field,” says Lambot. “Is the next thing more like a Train 2.0, or more like hyperloop itself? We shall see.”

Train 2.0 sounds like something President Trump might support. On the campaign trail, Trump repeated lamented the state of U.S. rail transport while praising the gleaming high-speed bullet trains found in parts of Europe and Asia.

It remains to be seen if that means the new administration will use federal funds to support languishing and controversial projects such as a proposed high-speed rail running the length of California. Or if something like hyperloop, which would make high-speed trains seem like Model Ts, would garner the support of lawmakers.

But Hyperloop supporters argue that once funded, such a system would pay for itself swiftly by speeding up commerce and moving freight more efficiently and less expensively (most experts in the hyperloop field consider passenger travel a secondary benefit).

Skeptics argue that while the technology might be available on a demonstration level, getting the requisite land-use permits to deploy a national network would be daunting, and making sure it meets human safety standards could be problematic. One person’s “cool ride” is another’s “terrifying trip.”

So far, companies such as Hyperloop One have, perhaps not surprisingly, been touting a range of feasibility studies in places such as Scandinavia, Russia and the Middle East, regions that might present both the necessary government funding as well as the lack of bureaucratic red tape required to make a hyperloop track a reality.

A (sort of) new entrant into the hyperloop race could well have other plans. Brogan BamBrogan, a Hyperloop One veteran who left the company under a strange cloud filled with lawsuits and countersuits, is now looking to get back into the game with his own L.A.-based hyperloop project called Arrivo.

BamBrogan, who cofounded Hyperloop One with Uber investor Shervin Pishevar, served as the company’s CTO before abruptly leaving last July, just a few months after the company successfully demonstrated its skeleton pod on a short track outside Las Vegas.

BamBrogan claimed that he was harassed at the company. Hyperloop One countersued that he and three other employees, which it dubbed the Gang of Four, were plotting to steal employees to start a new outfit.

The warring parties settled in November. This month, BamBrogan and the other three in the gang, — David Pendergast, William Mulholland and Knut Sauer — updated their LinkedIn status to cofounders of Arrivo, The Arrival Company. Details about the company’s plans are still unknown.

In the meantime, hyperloop-y eyes will be on the results of this weekend’s competition.

All the teams but rLoop hail from a range of university science and technology programs, and in each case the projects were undertaken on a shoe-string budget compared to the $160 million raised by Hyperloop One (Lambot said rLoop’s pod was built for around $80,000 as well as with technical support from TE Connectivity, a large sensor-solution company in the transportation section).

Once the winner is declared, per Musk’s decree, the secrets of their pod success will remain open-source and available to the broad hyperloop community.

Next up: Hyperloop Pod Competition II, which, according to the contest’s website will unfold this summer and “will be focused on a single criterion: maximum speed.”