“It’s about paying close attention to where you are and bringing the audience into a place of freedom, relief and recovery,” says Marea Stamper, a.k.a. The Black Madonna. Courtesy of the artist hide caption

toggle caption
Courtesy of the artist 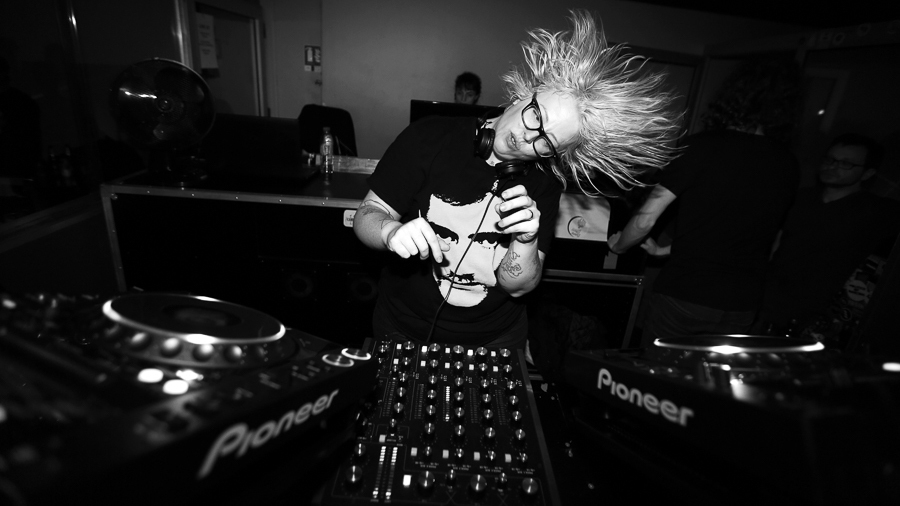 “It’s about paying close attention to where you are and bringing the audience into a place of freedom, relief and recovery,” says Marea Stamper, a.k.a. The Black Madonna.

Courtesy of the artist

Long before Marea Stamper was The Black Madonna, feminist DJ heroine, she was a known and beloved figure on the Midwestern rave scene: the mixtape girl. Stamper, who grew up in a small eastern Kentucky town and found her dance-music calling early because of a record-collecting stepfather, spent a chunk of her late teens and the mid-1990s going from party to party all over Middle America, selling DJ mix cassettes and spreading the rave gospel, while simultaneously receiving an unparalleled music education. The lessons stuck and the memories burrowed. When Stamper calls her club-night (or record label) “We Still Believe,” know that her devotion to the salvation of the dancefloor runs deep.

This mix of passion and dedication, sense of history, and an ingrained set of ethics is what makes The Black Madonna stand out in contemporary dance music. Her disco-house-centered sets (perfected over the decade that she’s lived in Chicago and worked up the ladder at one of its oldest and finest clubs (Smart Bar), and which have made her one of the world’s most popular DJs) flow like old-school narratives, and feature music that boomerangs era to era. Her outspoken nature — the loud championing of gay and women’s rights in social spaces and the dance-music business, plus a clear-eyed historical understanding of how minority cultures have built the club — is both a salve to the nature of our current cultural discourse, as well as a revolutionary call to arms. And if you do not think a DJ has that power, you’ve not heard The Black Madonna rock a party.

We asked Stamper to close out 2016 and open 2017 with a short mix of her recent favorites, and to give us a quick perspective. Here’s what she wrote — and what she mixed.

Piotr Orlov: How can a DJ express their point of view (social, political) via the music they’re choosing for the dancefloor?

Marea Stamper: Mainly what DJs do is take the temperature of a room and figure out how to use sound to modulate the way people feel. More than any specific sound or approach, it’s about paying close attention to where you are and bringing the audience into a place of freedom, relief and recovery, so that when the lights come up, they feel better. Depending on who you’re relieving, that act in and of itself is political, I guess.

In your sets, you balance different types of records — new and old, familiar and obscure, bangers and pointed statements. Talk a little bit about how you play with those balances and how you choose records to bring to the gig — or in the middle of a gig.

I don’t make any plans in advance. The main thing is to know what records I have access to and be able to mentally call on them at the right time to create an arc of feeling, or a story — in other words, knowing your records and then knowing when to deploy them to the greatest effect. Sometimes people need to connect to a historical moment or feeling in dance, sometimes they need the relief of bone-crushing techno. You have to be ready to go there.

Who were your DJ heroes when you were growing up as a Midwest raver? Who were the first people that inspired you to get on the decks and the first people who supported you? (Also: Any young artists you want to call out that you would want to give encouragement to right now?)

DJ Hyperactive was my first favorite DJ. The energy he played with and the way he would drop, for example, a Public Enemy a capella over a Rotterdam hardcore record really appealed to me. I think his influence still stands today. Terry Mullan was a God for me. Jajo (RIP) was a towering influence. Most of the people that supported me were Midwest rave promoters, but especially my early fanbase was always women. They would demand I be on lineups. Right now one of my favorite young DJs that I’m cheering for is Peggy Gou. She’s doing amazing work as a DJ and producer. Go go go, Peggy!

In addition to making music and DJ’ing, you are music director of one of the best clubs in the U.S. What are the challenges and the advantages of being on both the creative and the business side of things?

This job now is a little more like being the spiritual director of the club. Jason Garden is utterly capable and brilliant in my old position as talent buyer. I work now largely on special programming with partners and I work on Daphne [a Smart Bar event series subtitled, ‘A Women’s Movement in Dance Music’]. I still act a bit as the voice of the club and work with Jason on the larger concepts and residencies. It’s a great relationship. Smart Bar is so much more than a club to me. It’s home. It’s family. I consider [owner] Joe Shanahan’s daughter, Tara, my adopted sister. We’ve traveled all over the world together. It’s nice to have the club as a grounding force for me. I will be a part of it as long as they’ll let me come home.

Your single, “He Is the Voice I Hear,” is the first new music you’ve released in a couple of years, a period that’s coincided with you being a much more global presence on the DJ circuit. Talk a little bit about the negotiations that need to be struck between being a live performer/DJ and a recording artist.

Making music is the opposite of DJing. Making music is introspective and slow, and it’s about stillness. Whereas DJing is a mad dash to try and do a magic trick in some random country in front of a lot of strangers. I’ve finally, truly cut out time for production and it’s glorious. It fills up the spiritual part that touring drains. I’m so happy at home in this studio and delighted with the music that’s coming out of it.

You’re asked to make a lot of mixes. How do you choose what goes on them?

Context usually drives the mix. Perhaps I’ve been asked to emphasize new works and so I will find the absolute newest and best material. Sometimes — and I prefer this — I can be really free to explore history and tie it to the present, and that’s the mix that probably expresses me best.

Prince fined bassist for mistakes and ‘cheated’ him out of millions, memoir reveals

Dave McCary: 5 Things To Know About Comedian Married To Emma Stone After 3 Years Of Dating

Tiny Harris Wishes Her ‘King’ T.I. A Happy 40th Birthday In Sweet Tribute: ‘I Love You’