GEORGETOWN, Guyana — The discovery of an enormous oil deposit off the coast of Guyana was meant to catapult this tiny country into the top echelons of petroleum producers and put its citizens on the path to better lives.

Instead, it has deepened the historical tensions shackling the nation, leaving some Guyanese afraid that the newfound wealth will subvert the country’s fragile democracy and wipe out other industries, as happened in neighboring Venezuela. 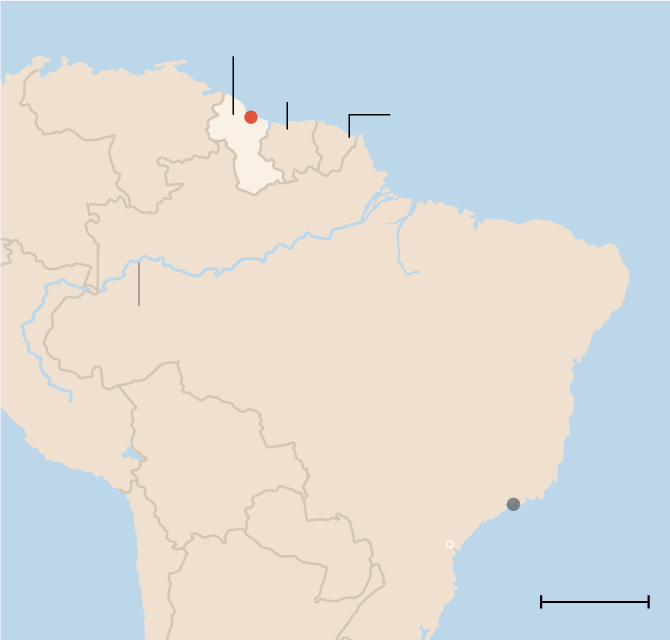 The tensions surrounding the elections for president and members of the National Assembly this week may be a sign of trouble to come.

The contest will determine the politicians who will be in charge when the oil money begins to flow this year. It was a hotly disputed race between leaders representing each of the country’s two main ethnic groups, the Afro-Guyanese and those of Indian descent. Voters were split almost perfectly along ethnic lines.

Since the election on March 2, public debate has descended into a cycle of historical grievances. Both parties fear that if they concede, the opposing party would use the oil wealth to shut them out of government for years to come — and deprive their constituents of their fair share of revenue.

So, without official results, both sides are claiming victory, threatening to hamstring the economy of Guyana, already one of the poorest countries on the continent, and plunge it into a prolonged political crisis.

“It’s a rare incidence,” he added, to expect to see “money bringing people together.”

The Guyanese recognize that overcoming long standing divisions is a challenge. But the discovery of 8 billion barrels of oil off the coast of Guyana by a consortium led by ExxonMobil could have been a powerful enough incentive for the country’s 750,000 citizens to overcome mutual suspicion and unite around the promise of an economic bonanza that could benefit all.

The start of oil production in December is expected to nearly double the country’s gross domestic product in 2020, according to the International Monetary Fund, and multiply in years to come.

Instead, the winner-takes-all attitude that has marred the elections is weighing heavily on Guyana’s economic prospects as it enters the oil age, said Ralph Ramkarran, a prominent local statesman who led a largely Quixotic campaign for a small multiethnic party.

“The thinking here is, ‘why share when you’re winning?’” he said. “Until that’s fixed, it will remain a place of suspicion and economic underdevelopment.”

The stakes could not be higher.

Exxon started production in December, and although the payoff in 2020 will be a trickle relative to what will come, it is expected to elevate oil income this year to a third of all government revenue, surpassing all of the country’s traditional exports combined, according to the I.M.F.

By the end of the decade, the country’s output will reach 1.2 million barrels a day, according to estimates by the oil consultancy Rystad. That would mean Guyana’s production would overtake the current output of its neighbor, the declining oil giant Venezuela.

The economic decisions taken by the next government will largely determine whether the former British sugar-growing colony is able to harness its oil wealth for national development. But neither major party has offered a plan for the nation.

Guyana’s tiny civil service and outdated laws have not kept up with Exxon’s breakneck development. The company began exporting crude from Guyana’s first deepwater well, located 120 miles off the country’s coast, in January, five years after making the initial oil discovery. The revenue from the government’s first load is expected to fall into the country’s coffers within the next few days.

The country’s mining and environmental laws, which also regulate the oil industry, are outdated and don’t even mention petroleum.

A tentative deal between the government and Exxon to use the natural gas associated with oil production to provide Guyana with cheap electricity, a major voter demand, has gone nowhere because there are no laws or state agencies that can guide such a project, said Guyanese officials.

“We were not expecting this level of activity,” said Newell Dennison, the head of Guyana’s Geology and Energy Commission, who is responsible for overseeing oil exploration from his office in the former colonial railway headquarters.

Mr. Dennison’s computer screen was obscured by stacks of paper, which covered his desk. Because the government’s natural resource databases are not digitized, he seldom needs to turn on the computer, he said.

Some in Guyana worry that the government’s preoccupation with oil is already displacing resources from the country’s traditional industries — sugar, rice, bauxite and gold — which are the country’s largest sources of employment. In the last few years, the government has shut down four unprofitable sugar plants, leading to the loss of 7,000 jobs. The main bauxite mine, run by Russia’s Rusal, is also cutting jobs and exports.

“They have stopped paying attention to the other sectors,” said Bharrat Jagdeo, leader of the opposition.

A new economy catering to oil is rapidly taking shape. Around the capital, Georgetown, abandoned sugar fields are being bulldozed and turned into luxury gated compounds for foreigners and supply bases for the oil companies. A new shopping mall hosting a Hard Rock Cafe and 12 cinemas is catering for those able to tap into the industry’s boom.

But while the offshore oil fields will shower Guyana with billions of dollars in the coming years, they provide few direct jobs. And like everything else in the country, the fate of the displaced agricultural and mining workers has become a partisan battle.

The opposition People’s Progressive Party, backed primarily by the descendants of indentured Indian laborers brought by the British, has promised to use the oil revenues to reopen and modernize the bankrupt sugar refining plants, reflecting their traditional strength in the rural areas.

The ruling Partnership for National Unity party, supported mainly by Afro-Guyanese, wants the agricultural workers to retrain by pouring the oil money into health and education, a nod to their strongholds in the public sector.

But neither party has provided any concrete investment figures or outlined any initial projects.

“The profits from our petroleum industry will provide you, and you and you with a good life,” President David Granger, a 74-year-old retired Army Brigadier who is running for re-election, told tens of thousands of supporters on Saturday.

At the opposition closing rally earlier that day, the opposition leader, Mr. Jagdeo, lambasted the government’s handling of the Exxon contract, which grants the company highly favorable terms, without presenting a detailed path forward.

For many voters, party preference is driven by tradition and allegiance to their own group rather than policies.

“My family has voted for them since I was little,” said Ashad Ali, a welder who attended the PPP’s closing rally in the outskirts of Georgetown. He and six of his friends shrugged when asked to explain why their party would be a better manager of the oil wealth.

According to the latest census, ethnic Indians comprise 40 percent of Guyana’s population, compared with 30 percent for the Afro-Guyanese. The country’s traditional swing vote are the Indigenous communities comprising about 10 percent of the population.

The strong performance of a multiethnic party, Alliance for Change, in the last elections briefly raised hopes that the country finally began to surmount its colonial past.

But support for the party had collapsed after it joined Mr. Granger’s coalition.

“We can’t bridge a racial divide,” said Mr. Ramkarran, the veteran champion of a multiethnic government.

What We Learned About Pegasus, the Smartphone Cracker

After 600 Years, Swiss City at Last Has a Woman on Night Watch

The Battle for the World’s Most Powerful Cyberweapon

South Korea Indicts Defector From the North Over Leaflets

Biden Includes European Allies As He Confronts Putin On Ukraine

Sarah Palin, Who is Unvaccinated, Dined Outdoors in N.Y.C. After Testing Positive

Harris Seeks Ally in Honduras as She Revisits Central America

In Afghanistan, aid workers rush to save millions in freezing temperatures

‘We’ve Been Through This Before’: Ukraine City Braces for Possible Russian Invasion

Sweden declines to recommend vaccinating kids under 12: ‘We don’t see any clear benefit’

A ‘NATO Nerd’ Thrown Into the Crisis Over Russia and Ukraine

How Russia Has Increased Its Military Buildup Around Ukraine

The Ending of ‘Fight Club’ Was Censored in China

Why Is Everyone Going to the Dominican Republic?

Can Biden Avert a Crisis With North Korea?

Russia’s Military, Once Creaky, Is Modern and Lethal

Yes, Omicron Is Loosening Its Hold. But the Pandemic Has Not Ended.

Tomi Lahren: Why is defending Ukraine’s border the priority over securing our own?