Visitors to the western end of Fire Island are greeted by a large sign telling them to “Stop, turn around, go back.”

In bold, red letters, the sign proclaims that the island’s residential areas are “closed to visitors” and that it has “No restrooms, no open business, no medical facility.”

In fact, visiting Fire Island is not banned — a resident put up the unofficial sign — but it is strongly discouraged by local officials who fear that outsiders might bring the coronavirus to this 32 mile-long barrier island east of New York City, accessible mainly by ferry from mainland Long Island.

Like many summer vacation areas, the region’s island communities have looked with trepidation at the encroaching virus and the visitors who might be carrying it with them. But the islands have been especially adamant about avoiding possible exposure from newcomers; the isolation that makes them so charming also makes them terrible places to fall ill.

Though their county, Suffolk, has become a virus hot spot, Fire Island, Shelter Island, Fishers Island each have had few or no documented cases. The same goes for Block Island, just beyond New York waters in Rhode Island.

And the islands want to keep it that way, fearful that an outbreak that would overwhelm their bare-bones, off-season medical and emergency rescue services.

Fishers Island, Shelter Island and Block Island each have one full-time doctor covering the island. Fire Island has no such setup. 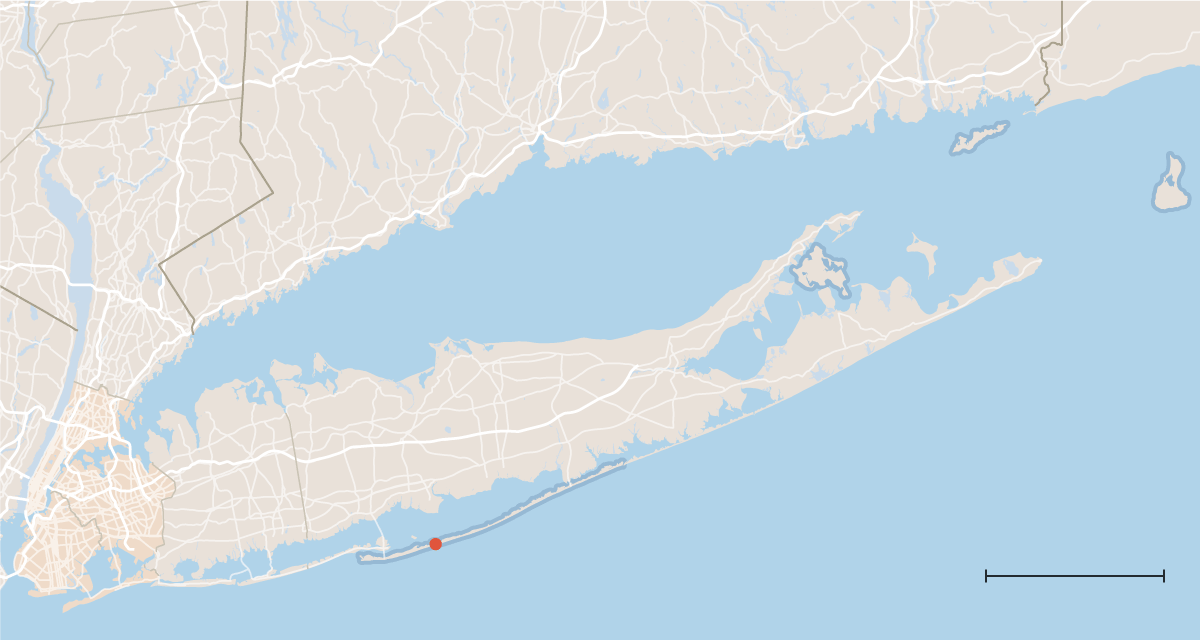 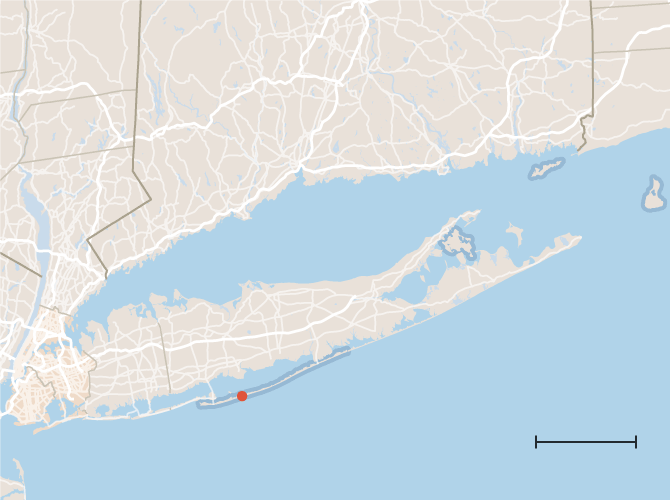 The islands have managed to remain essentially virus-free partly because of their geography. Since most visitors arrive by boat, officials can monitor who arrives and check their health conditions and exposure history. They have taken measures including posting (official) notices at ferry docks, quarantining new arrivals, and conducting contact tracing of the few cases they do have.

On Fire Island, there have been no documented cases among its roughly 300 year-round residents, nor among the hundreds of summer homeowners, largely from New York City, who have flocked there in recent weeks despite the apprehension of the full-timers.

“A lot of people called and said, ‘We’re trying to escape the virus and need to get out of the city — can you open my house?’” said Gary Cuomo, whose property management company on Fire Island opens and maintains homes for summer residents.

Mr. Cuomo — no relation to Gov. Andrew M. Cuomo — has opened more than 100 of them in recent weeks, though he knows some of the year-round neighbors might not be happy about it. “Obviously, they’d prefer them to stay in Manhattan and not come out here,” he said.

Fishers Island, an exclusive sanctuary in the Long Island Sound just off the Connecticut coast, has set strong recommendations against migration onto and off the island and requires two-week quarantines both for newcomers and anyone who ventures off, even for a brief errand.

Fishers Island has a summer population of perhaps 2,500 but only about 250 year-round residents, who help provide vital services including running the ferry, the volunteer fire department and the handful of local businesses.

Several hundred seasonal homeowners have relocated to the island, but it has had only two known cases of the virus: both seasonal residents who officials believe may have unknowingly been infected when they arrived.

One had to be taken to a Connecticut hospital by the island’s Sea Stretcher, a marine ambulance. Both have since recovered and returned to their primary homes off-island, island officials said.

Lacking test kits, island leaders feared that even a small outbreak would overwhelm the island’s only doctor, Dr. Chris Ingram, who created a confidential Covid-19 medical census to distribute to ferry passengers that gathers personal information and details about any symptoms and possible exposure to the virus.

Dr. Ingram has also begun contact-tracing of symptomatic individuals, partly to warn others who may have been exposed.

On Block Island, there are so few medical workers that a viral outbreak “could become catastrophic very quickly here,” said Martha Ball, a town councilor.

Early on, some residents grew fiercely territorial, and there were calls to bar visitors and summer residents to avoid “breaking the seal,” Ms. Ball said. One resident threatened to vandalize and cut the island’s electrical power supply to discourage visitors, she said.

Other summer island resorts in the Eastern United States — including North Haven, off the coast of Maine, and much of the Outer Banks in North Carolina — have tried to seal themselves off by barring visitors.

In Vinalhaven, an island town in Maine, several residents cut down a tree and dragged it into the middle of a road to try to quarantine three new arrivals who they believed may have been carriers of the coronavirus. (They weren’t.)

The town council on Block Island, which has about 900 year-round residents, concluded that an outright ban would be illegal. They instead enacted an emergency ordinance that set a wide array of restrictions and discouraged people from relocating to, or even visiting, the island, which has year-round ferry access from mainland Rhode Island and a seasonal ferry from Long Island. Ferries to the island have been reduced to one per day, most days.

The restrictions were posted online and publicized by fliers distributed at the Rhode Island dock. The message, Ms. Ball said, was “Do you want to be the person who comes here and infects Block Island?”

The island saw its first confirmed case last week, a man who was transported to a hospital off the island. Afterward, the island’s only grocery store immediately stopped allowing customers inside, Ms. Ball said.

With a heavy influx of summer homeowners last month from New York City, officials on Shelter Island posted quarantine notices at ferry docks and warned against hoarding at the island’s only supermarket, said Jack H. Thilberg, a town spokesman.

“We’ve created an environment here that’s safe, and to have an influx of sick people come here would compromise that,” he said. “You’re coming here because you want to be safe with your family. So don’t make us sick.”

The island has had six reported coronavirus cases, including two elderly residents who died and a local health care worker who recovered and is back at work, he said.

On Fire Island, Mr. Cuomo, the property manager, said he had opened 125 houses in recent weeks in and around Ocean Beach, one of 17 communities on Fire Island, and provided a list to local police seeking more detailed information on new arrivals.

At the Ocean Beach freight dock, a mix of year-rounders and summer homeowners lined up on a recent weekday to pick up food delivered by boat.

Tara Schoen, a New York City schoolteacher who lives in Manhattan, picked up bleach, toilet paper and seeds for a garden she was planting.

Her friend Todd Pavlin, who splits his time between Manhattan and Fire Island, said staying on the island was more reassuring than in Manhattan, where some residents in his apartment building had tested positive for the virus.

He acknowledged the luxury and social inequality of being able to flee to a summer home and ride out the pandemic in safer, beachy surroundings. “Front-line workers like subway crews can’t afford to be on Fire Island,” he said.

Still, he added, “As soon as you get here, you feel protective, and don’t want anyone else to come.”

‘Being the Smoke’: One Man’s Choice to Be Cremated Under the Open Sky

She Wrote ‘How to Murder Your Husband.’ Did She Do It?

2 Children Have Been Hospitalized Because of Formula Shortage

How Buffalo Suspect’s Racist Writings Reveal Links to Other Attacks

A Fringe Conspiracy Theory, Fostered Online, Is Refashioned by the G.O.P.

A Fracture in Idaho’s G.O.P. as the Far Right Seeks Control

With Roe in Peril, Thousands Gather at Marches for Abortion Rights

Alabama’s Transgender Youth Can Use Medicine to Transition, Judge Rules

How Overturning Roe Could Backfire for Republicans

How Two Middle School ‘Desperadoes’ Ended Up in a Police Shootout

Anti-Abortion Group in Wisconsin Is Hit by Arson, Authorities Say

Where Does the Anti-Abortion Movement Go After Roe?

Formula 1 Roars Into Miami, Where Cars Are Already King

Florida Releases Reviews That Led to Rejection of Math Textbooks

With Legalized Pot in the Air, a Federal Trial Riles Advocates

Life in a Minnesota ‘Fishbowl’: Water Everywhere, Except Inside Town

Bill Classifying Abortion as Homicide Is Advanced by Louisiana Lawmakers

‘Burning Down a Way of Life’: Wildfire Rips Through a Hispanic Bastion

‘I Can’t Have This Baby’: A Lone Abortion Clinic on the Border

The E.U. moves to shut off Russian oil